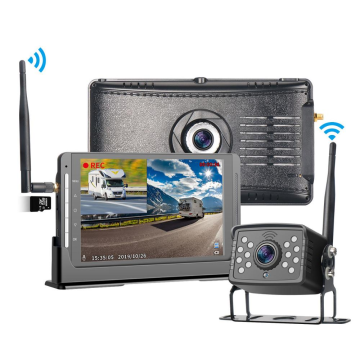 Features:
The Backup Camera screen kit can provide you with a clear rear view for your driving.
Full color TFT LCD display, Low power consumption.
Parking rearview priority, the monitor will start up automatically, and synchronously display the video from rearview camera when you're backing your car.
The monitor will close itself after backing. Scenes will cut to rearview camera automatically while you're backing the car and change back to the original scenes after that.
Supports Car Camera, DVD, VCD, STB, Satellite receiver, and other video equipment.
Designed menu buttons, the brightness/contrast/hue/language is adjustable.
With 2 road video input port, white video cable connects to Car Rearview camera, the yellow one connects to DVD or VCD, White video cable is priority signal input, when 2 road has signal input, the machine will prioritize the white end signal.
No Audio input or output.

Transmitter and receiver:
Take one minute get your camera become a wireless camera.
Convert any reversing camera with a standard phono/RCA connector into a wireless camera with this universal transmitter and receiver kit.
Eliminates the need to run a cable the length of the vehicle, just connect the transmitter at the camera end and the receiver at the monitor end.
The transmitter also includes a handy pass through for the power so you can connect it in line with your camera.
Wireless receiver with male phono plug for connection to monitor.
Connects to rear-view camera and front video screen. Shenzhen Sunveytech Co., Ltd., is a high-tech enterprises engaged in car electronic products.Our factory is specialized in developing and manufacturing vehicle bachup camera systems since 2007. Including wired Backup Camera , wireless backup camera system ,wifi rearview backup camera and rearview monitor. Series products of the company based on its stable quality, advanced design, unique features, reasonable price, are warmly welcome by consumer. The company executes producing strictly in accordance with the ROHS standard, and obtained the certificates of IP68, CE, FCC, etc. Sunvey-tech has set up an overseas and domestic market to establish a perfect sales and service network. Products are exported to Europe, America, Southeast Asia, and most of the Middle East countries.

Email to this supplier